Lee Alexander McQueen was born on March 17, 1969, in Lewisham, London. The youngest of six children born to a taxi driver father and schoolteacher mother. Alexander, or Lee as he was more commonly known, knew from a young age that he was gay, and as a result suffered much teasing from his classmates. He started making dresses for his three sisters at a young age, and announced his intention to become a fashion designer. At sixteen, he dropped out of school to pursue a career in fashion, taking up an apprenticeship on Savile Row with tailors Anderson & Sheppard, then Gieves and Hawkes, and later joining theatrical costumers Angels and Bermans as a pattern maker. While on Savile Row, his clients included Mikhail Gorbachev and Prince Charles. His work during this time was of immense value as practical education and the tailoring and costuming skills he acquired as an apprentice would be leveraged throughout his career, popping up in collection after collection. He left London for a brief period to work for Italian fashion designer Romeo Gigli in Milan, and upon his return to London enrolled at Central Saint Martin’s College of Art & Design. He graduated in 1992 with a Master of the Arts in fashion design, designing a line inspired by the infamous Jack the Ripper as his final project.

In the early 1990s, McQueen harnessed street style to introduce a new trend in the denim world with the ‘Bumster’ trousers, a very low-rise pant that gained immediate popularity. In October 1996 McQueen was appointed Chief Designer, at Givenchy, an haute Couture House in France, replacing John Galliano, where he worked until March of 2001. Despite the fact that he complained that the position was crushing his creative impulses, he was wildly imaginative with these early runway collections, developing a reputation for controversy and shock factor: Once he sent a double amputee down the catwalk on intricately carved wooden legs, and at another point he created robotic arms that frenetically spray painted designs onto a white cotton dress. He won British Designer of the year in 1996, 1997, and 2001, all during his time as Chief Designer for Givenchy. 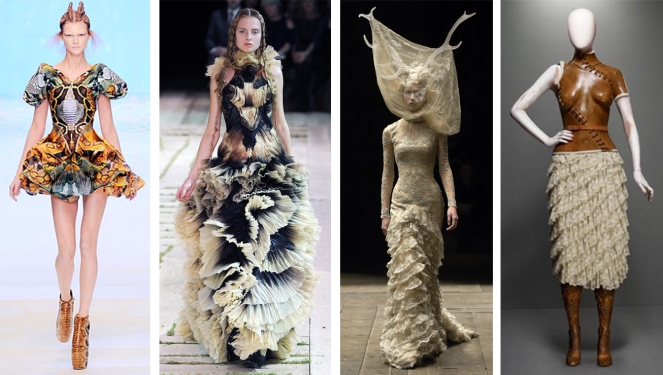 In 2000, just before he left Givenchy, Gucci bought a 51 percent stake in his company providing him the capital to branch out on his own on a much larger scale. His seasonal lines were a blend of historical references and, in tribute to the more gothic elements of nineteenth century Victoriana, he paid homage to contrasting themes throughout his lifetime: light and dark, life and death, natural vs. unnatural, and melancholy and beauty. His choice of fabrics and construction techniques played into these themes with the introduction of splendid frock coats, slashed leather, pieced peekaboo lace elements, birdlike elements, and exaggerated silhouettes. He incorporated elaborate narratives, paying extra attention to accessories including staggeringly high heeled shoes, innovative millinery and heavily applied, dramatic makeup. Each show became a theatrical production.

In 2004, McQueen designed his first menswear collection and, as a result, was named British Menswear Designer of the Year by the British Fashion Council. In January 2006, he launched a more affordable ready-to-wear line, named McQ, which included menswear, womenswear, and accessories and featured denim heavily.

McQueen had a history of depression, anxiety and insomnia, and tried to commit suicide a number of times, finally succeeding on February 11, 2010, shortly after the death of his mother. He had hung himself in his London apartment after taking a cocktail of cocaine, sleeping pills and tranquilizers and was found by his housekeeper. He had left a note saying, “Look after my dogs, sorry, I love you, Lee.”, and it was later discovered that he had bequeathed £50,000 of his wealth for the care of his pet dogs so that they could live out the remainder of their lives in luxury. He also made significant donations to charities around the U.K. Sarah Burton, McQueen’s right-hand woman who started working for the label in 1996, took over as the new creative director after McQueen’s death.

One thought on “Alexander McQueen”