I’m not going to apologize for my absence these last few months, it’s been a busy time. In June, I left my studio space at PHOENIX Alameda. Not a day later, our landlord decided he wanted to give the house we were living in to his son, and so we received notice to vacate. We had a few months of panic, but found a place to call home are now finally settling in. On top of the moving drama, I was freelancing as a graphic designer for three different companies and had also just started working at S-Curve Apparel and Design, grading, cutting and stitching costumes for ballets all over the country. Talk about being busy! But, I love my clients and would do anything for them, well…within reason, I suppose.

I’ve really been enjoying my work at S-Curve, not only because I love the name (I really do!) but because it’s challenging and fun, and I enjoy working with the designer/owner, figuring out tweaks here and there as we go. As an added bonus, I get to work with knits and fabrics I normally don’t use much, and am getting practical advice on how to best work with them for performance wear. She has a wealth of knowledge and, as a former ballet dancer herself really understands the needs of a dancer when it comes to both movement and comfort.

Just a few weeks ago, my fall classes started. This semester I am taking tailoring, knits and serger techniques, and continuing with my patternmaking class. I’m working on necklines now, finally getting a chance to catch up after the crazy summer. Tailoring is tough. I drafted a flared princess coat, and after adding up all of my pieces, including things like hair canvas and lining, have over 90 pieces to cut and sew. For one jacket. I’ll do another post on that one with some progress shots.

Our new  home that has a detached studio space in the back. ALL FOR ME. Well, kind of. I’m going to share it with Justin and the kids as a swing space, but since I will likely be in there the most, I get to make the decisions about it. I started by having electrical trenched out to it and outlets installed. Then painted the walls a color that made me feel peaceful. Because when you are sitting there with a stitch ripper in hand, you need to feel peaceful, right? Of course, I couldn’t leave things plain and simple, so I came up with a crazy scheme to stencil my new studio floor.

It’s cement, so I did a bit of research and came up with a plan. Two coats of primer, three coats of silver metallic, a stencil from Royal Design Studio, two colors of high-traffic latex paint, three coats of polyurethane, and a week or two later… voila! Gorgeousness. I admit, I had a hard time letting go of the imperfections of cement, but have since embraced them and am amazed at how it shimmers. Now I’ve got to work to get all the furniture in and set up! With freelance design work, sewing for the ballet, fall semester’s school schedule, and having two children, it probably won’t happen for another week or two, but when it does I will share a little tour. I’ve got some organization tricks in mind. 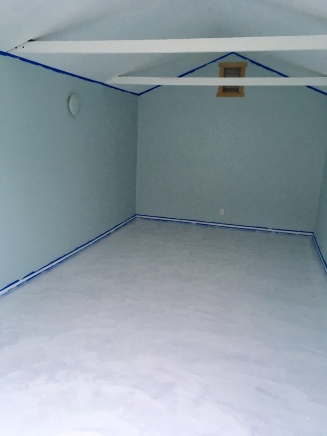 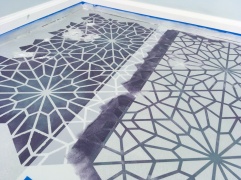 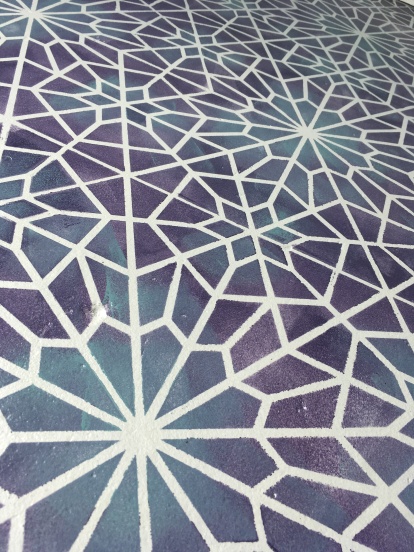 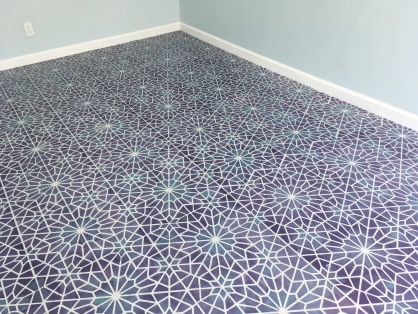